If you’re not sure what a storyboard is, just look at a comic book. A storyboard is basically the same thing, using a sequence of still images to help visualize a story. In advertising, storyboards provide a visual snapshot of key scenes in a commercial, and can be used to help sell a concept or as a blueprint for staging, lighting and photographing a project.

But useful storyboards can take many forms, from elaborate, full color illustrations, to crude stick figures scrawled directly on a script. Whatever their quality, all storyboards serve the same function; they make you think in pictures.

But storyboarding is one of those things that a lot of people misunderstand. For starters, storyboards are not necessary for every type of project, especially if the project has a limited budget, doesn’t involve narrative elements or if continuity isn’t important. Storyboarding also requires an understanding of filmmaking techniques, including composition, continuity and shot coverage, so the most effective storyboards are usually created or supervised by a talented director.

The scope of a project can also determine whether storyboards are needed or even practical. In advertising, long-form projects like half-hour infomercials are the most difficult to storyboard because of the sheer number of shots involved. While storyboarding scenes can be a huge time-saver during production, it likewise takes significant time, energy and money to create them beforehand. Hiring an illustrator to create simple black and white illustrations for a 30 minute program can take days and cost thousands of dollars. Even drawing simple stick-figure based boards can be time-consuming for a long-format project.

Storyboarding also requires detailed location scouts, something that can be difficult to undertake on a modest budget. Plus, many good directors can visualize scenes and shots without the aid of storyboards, so if a project has a skilled director and a limited budget, it’s probably best to skip storyboarding and use the time and money saved on the shoot or edit.

But short-format projects like commercials typically should be storyboarded. Simple drawings work fine for most projects, but basic film and video framing techniques need to be followed and storyboard images should lead viewers logically through the storyline. A good storyboard will include master shots that establish a location or place and time, along with cut-ins, cut-aways and other shots typically used in film and video production.

Here are a couple of detailed storyboard examples from projects we’ve produced. On the first, we created the storyboards. On the second, the client provided them. Each storyboard is followed by the finished video. 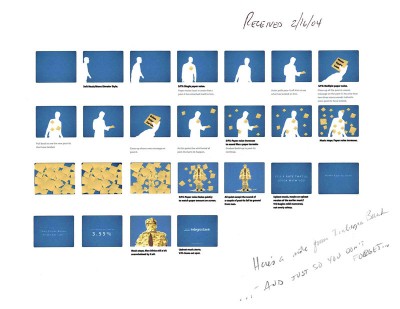 Notice how the videos are almost shot for shot the same as the storyboards. Naturally there are differences, but that’s pretty common. Scripts are often revised after a shoot and shot sequences can change during the edit. That’s why we often shoot additional shots that aren’t storyboarded to make sure we have enough coverage during the edit and to offer choices to both the editor and the client.

This is where storyboards can dramatically improve your video. They make you think of different ways to tell your story with a camera. They help you think about creative camera placement, scene coverage and editing, forcing  you to think about how the images will cut together after the shoot. Using storyboards can also tell you exactly how many setups and shots you’ll need to complete your shoot, so they can save time that’s usually spent compiling shots lists and creating elaborate shooting schedules.

Storyboarding can also be useful for all-graphic, animated projects. Here’s an example from a recent project we created for the Ten Adams Ad Agency. Creative Director Kris Laufer and Art Director Madison Strobel concepted and created the boards.

Notice how the finished video closely matches the boards. By providing the layout and sequencing, the client saved at least two full days of design, compositing and production costs. They also gave their client a great snapshot of what the finished commercial would look like before spending a dime on production.

Designing full screen graphics prior to edit sessions allows you to think about font styles and layout before you start animating or compositing. You don’t have to waste time trying to create keyframes or fitting text and graphics onto the screen. You can focus on finding clever ways to animate elements and refine those movements. Better yet, if you’re a designer for an ad agency, your designs and layouts will stay consistent when you hand them off to an animator.

The most frequent excuse for not storyboarding is the time it takes. But it’s a classic catch-22. You can either spend time thinking about visuals before the shoot and edit, or spend time thinking about them (at $200 an hour or more) during the shoot or edit. However, creating useful storyboards can also be expensive, especially if clients want professional sketches or full-color illustrations, which can cost from $20 to $50 per sketch depending on their detail and use of color.

In my experience it’s not uncommon to spend 30-60 minutes on each panel in a professionally sketched or illustrated storyboard, sometimes more. That includes the time to think about the shots, create the layouts or sketches, and compile them into storyboard form. That’s anywhere from 6 to 18 hours for a standard 12 or 18 panel board. Naturally stick-figure boards take much less time but can often be just as useful in the hands of a good director.

I’ve also found that storyboards can actually make it MORE difficult for some people to visualize a project or storyline. I call these people “literal thinkers” and they typically have to read or hear a description before a concept clicks. It’s always amazed me that people like this work in a visual industry like advertising, but it’s surprisingly common. Showing these folks storyboards typically elicits blank stares and retorts of “I don’t get it.” Or worse yet, they focus on irrelevant details in the sketches. Some favorite responses include: “Why does the actor have a mustache? Will he have a mustache in the commercial?” Or…”Is that what the actors will be wearing?” There are dozens more, but you get the idea.

This phenomenon is especially true if the storyboard is used as a tool to sell a concept prior to getting the green light to produce it. These types of boards usually don’t have finished graphic layouts and often use royalty-free stock images to represent people or locations along with simple text and design for full-screen graphics. Literal thinkers just cannot look at a sequence of images like this and translate it into any sort of storyline without getting bogged down on unimportant details.

But more often than not, a storyboard will improve a video project by forcing those involved to think about how the story will be told visually. So if budget allows, it’s definitely worth it to have a skilled director sketch or supervise the creation of a storyboard.

Here are some simple, stick-figure based storyboards that I created for other commercial projects. As you can see, I’m certainly no sketch artitist, but storyboards don’t have to be works of art to be useful. 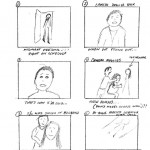 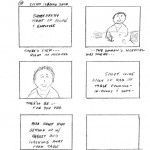